In the New York Times, philosophy professor David Albert dismantles a cosmologist’s claim to have explained why there is something rather than nothing. Richard Dawkins had managed to get behind this silly idea.

Look at how Richard Dawkins sums it up in his afterword: “Even the last remaining trump card of the theologian, ‘Why is there something rather than nothing?,’ shrivels up before your eyes as you read these pages. If ‘On the Origin of Species’ was biology’s deadliest blow to super­naturalism, we may come to see ‘A Universe From Nothing’ as the equivalent from cosmology. The title means exactly what it says. And what it says is ­devastating.”

In this lovely concluding passage, Albert expresses his disappointment with this kind of atheism:

When I was growing up, where I was growing up, there was a critique of religion according to which religion was cruel, and a lie, and a mechanism of enslavement, and something full of loathing and contempt for every­thing essentially human. Maybe that was true and maybe it wasn’t, but it had to do with important things—it had to do, that is, with history, and with suffering, and with the hope of a better world—and it seems like a pity, and more than a pity, and worse than a pity, with all that in the back of one’s head, to think that all that gets offered to us now, by guys like these, in books like this, is the pale, small, silly, nerdy accusation that religion is, I don’t know, dumb. 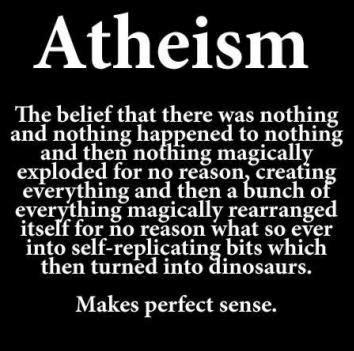 I enjoyed this. The lesson: mockery is cheap. (HT In Bona Fide).

The latest from Johann Happolati